Ajay Jadeja is an Indian retired professional cricket player, cricket commentator, analyst, and a Bollywood actor. He is a Cricket celebrity.

The Indian Cricket Player and Commentator played regularly and actively with the Indian cricket team between 1992 and 2000. During this time, he played ’15 Test matches and ‘196 One Day Internationals’ for the team.

He became a cricket commentator before he retired from cricket in 2013. Also, he joined Bollywood and featured in films including “Khel” in 2003, “Pal Pal Dil Ke Saath” in 2009, and others. 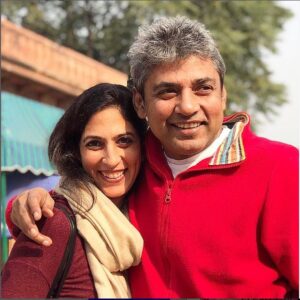 Ajay Jadeja is happily married to Aditi Jaitley, whose mother is Jaya Jaitly, a politician.

Ajay Jadeja and Aditi Jaitley got married in 2000. They have two children, a son named Aiman Jadeja and a daughter named Ameera Jadeja.

However, Ajay Jadeja was allegedly reported to be in a romantic relationship with the Bollywood beauty Madhuri Dixit.

Their first meeting was during a magazine cover shoot, and from there, they set the ball rolling. It is reported that it was on Madhuri’s recommendation that a producer endorsed Ajay Jadeja in one of his films. 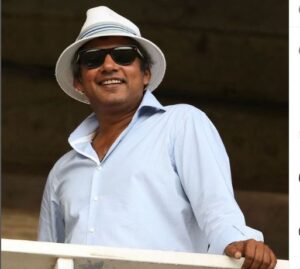 Ajay Jadeja, the only child of his parents, was born on February 1, 1971, in Jamnagar, Gujarat, under the zodiac sign Aquarius and into Sir Ranjitsinhji Vibhaji Jadeja (Maharaja of Nawanagar) Royal family.

His parents are Daulatsinh Jadeja (father), a former Member of Parliament from Jamnagar Loksabha for three good times, and Gyanba Jadeja (mother).

His general education and studies were at Bharatiya Vidya Bhavan, New Delhi.

Ajay Jadeja is 51 years old. He celebrates his birthday on February 1 every year. 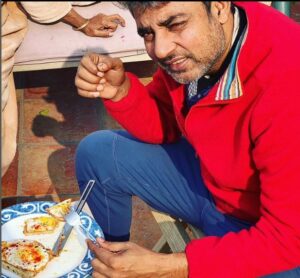 Although retired, Ajay Jadeja, an Indian Cricketer, left a lasting legacy. In his days in the ’90s, he was considered among the best Indian team players.

He played regularly in the Indian cricket team. He represented the Indian national team in more than 196-day international matches and played 15 test matches.

Ajay Jadeja’s first-class debut was in 1988 when he played for Haryana and played 111 matches and scored close to 9000 runs, including 20 centuries at an average of 54.0. It later landed him a chance to play for India in 1992.

Ajay Jadeja, an aggressive batsman, played ‘One Day Internationals’ for India and debuted in the International Test against South Africa. He only made three runs in the first innings and did not bat in the second innings in November 1992.

His appearance in the quarter-finals of the 1996 Cricket World Cup in Bengaluru against arch-rivals Pakistan was a remarkable one as he hit 45 from 25 balls, including 40 from Waqar Yunus’ last two matches.

He led India in 13 one-day matches and took three wickets for three runs in 1 against England in Sharjah to win the India match. Jadeja

Ajay Jadeja was with the Indian cricket team for eight years but was later banned for five years by the BCCI when his name was associated with a match-fixing scandal.

In 2003, the ban was lifted after five years, he played Indian domestic cricket, and in 2013, he played his final match and then retired from cricket.

However, after his ban was lifted in 2003, he joined Bollywood and appeared in the film “Khel,” also starring Sunny Deol and Suniel Shetty that same year.

In 2009, he also appeared in the movie “Pal Pal Dil Ke Saath,” starring Tanvi Azmi, Mahie Gill, and other stars. V Krishna Kumar was the director. He was also featured on the TV show Comedy Circus.’

Ajay Jadeja also participated in the first season of the famous reality dance show ‘Jalk Dakhla Ja.’ In 2013, he appeared briefly as himself in a film called “Kai Po Che. ” He had also begun his commentary and cricket analyst career before retiring entirely from cricket.

Ajay Jadeja Net Worth is estimated to be $12 million.

Although Ajay Jadeja has retired, he is still famous in the Indian cricket sport, and his career did fetch him a fortune which he enjoys till today.

His net worth has been estimated to be about $12 million. His salary and monthly income are not yet revealed.