Colin Cowherd is a broadcaster and an American Radio Personality. He is the lead anchor of opinion-based sports studio programming on the radio. If sportscasting were to be a man, it must testify to his contentious perspectives. On the contrary, it is not for a bad cause.

FOX Sports can readily attest to the unique journalistic style of Colin Cowherd, who joined them in 2015.

Today, the network has recorded remarkable viewership growth on the studio programming due to Colin’s input.

Today, Colin’s experience and talents as a sports expert have earned him much more, both financially and fame.

You can also read about Countess Vaughn, Miranda Kerr, and  Kristin Chenoweth. 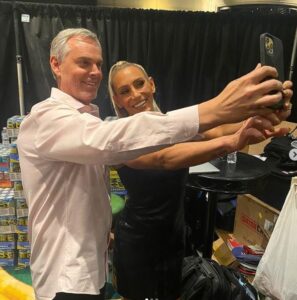 Here are the things you need to know about Colin Cowherd, the unique sportscaster.

Colin Murray Cowherd was born on January 6, 1964, in Aberdeen, Washington, the United States, to Charles Cowherd, the optometrist, Patricia Cowherd, British-born, during the baby boom era. He grew up in his hometown of Grayland, Washington.

He has an older sister named Marlene. Colin described his childhood as dark and isolated and not even the best childhood. It resulted from his parent’s divorce when he was still young, and he had to live by the outcome of other marital choices made by his parents. They were therefore raised single-handled by their mother.

Colin had to find relief from the radio broadcasts of baseball games, as well as playing too.
He also engaged with basketball and football and belonged to their respective teams while in college and was an active student. He graduated from Ocosta High School in Westport in 1982.

Colin first worked and earned a living after school as an educator. He started the broadcasting career that has brought him to fame by initially working as the play-by-play commentator for the San Diego Padres Triple-A affiliate Las Vegas Stars and then took the role of a sports director with KVBC in Las Vegas, Nevada.

Having carved a niche and gained experience, he never stopped growing. He later served as a weekend sports anchor at WTVT in Tampa, Florida, and in 1996, he relocated to Portland, Oregon, where he worked as a sports anchorman and did sports talk radio on KGW-TV.

Then, after some years, in 2001, “The Herd” adjusted from an afternoon time slot on all-sports radio KFXX to the morning drive time. Colin was the host of this popular three-hour morning drive program in Portland, Ore.

In 2003, Colin later moved to ESPN Radio to start hosting his show, “The Herd with Colin Cowherd.” His program was launched as a three-hour sports talk program. From 2004 to 2015, the show was transmitted to ESPN Radio affiliates.

In September 2015, he joined FOX Sports and Premiere Networks as a television, radio, and digital personality. He contributes to coverage of many of FOX Sports’ marquee events and appears on FOX NFL KICKOFF, the Sunday morning NFL pregame show.

In the course of his career, Colin became an author.
Books authored by Colin Cowherd.

● His exceptional performances earned him named Nevada’s Sportscaster of the Year five times by the National Sportscasters and Sportswriters Association.

● Colin was named Sports Illustrated’s Radio Personality of the Year in 2005.

● He was rated as the Best Pundit of 2012 for his sports predictions by PunditTracker.

● In 2013, Colin’s first book, “You HERD Me!” became a “New York Times” bestseller, spending five weeks on the list in hardcover.

Colin’s outstanding efforts in broadcasting have paid off, and his net worth is currently estimated at $ 20 million.

He got married to his first wife, Kimberly Vadala, in 1996 but divorced in 2007. He later married his current wife, Ann Hamilton-Cowherd, in 2010. He resides with his wife, Ann, and two children in Los Angeles.

Who is Colin Cowherd, daughter?

More: Biography of Terri Trey Gowdy: A Woman Who Walks on Purpose